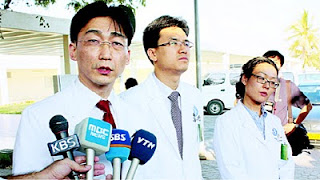 Defense Minister Kim Kwan-jin said, “If one or two people were lost during the operation, the people would accept this, but more would lead to criticism that the operation was reckless, and the military took this into consideration.”when the Cheonghae Unit began its rescue operation on Jan. 21, the pirates looked the Korean crew, who had taken refuge under blankets on the bridge, in the face and took several aimed shots at ship captain Seok Hae-gyun,
Seok is suffering blood poisoning from gunshot wounds in the abdomen and fractured legs, in addition to a blood clotting disorder due to a low platelet count. "He's weakening rapidly," the official added.

Seok received an emergency operation to treat the infection at the hospital in the presence of a Korean medical team of three led by Prof. Lee Kook-jong of Ajou University Hospital, who is an expert on gunshot wounds.

In a press conference right after the surgery, Lee said, "Seok has very serious wounds. The latest operation was only part of efforts to slow down the pace of deterioration, but many operations will be needed."

He said Seok's abdominal organs are badly damaged. "It's hard to tell how many bullets are still in his body, because many bullet fragments are scattered in the arms as well."

The plan to transfer him to Korea will therefore likely be delayed.
Posted by kokstad at 12:04