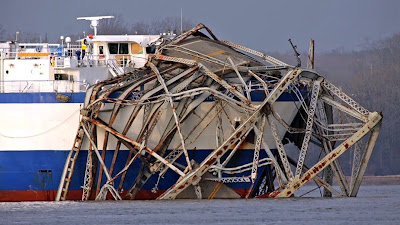 The Delta Mariner was traveling on the Tennessee River on its typical route from Decatur, Ala., to Cape Canaveral Air Force Station in Florida when it was unable to pass under shorter spans of the bridge and collided with the structure. The 312-foot, 8,400-ton Delta Mariner hauls rocket parts for the Delta and Atlas systems to launch stations in Florida and California, according to a statement from United Launch Alliance, which builds the rocket parts in Alabama. The ship's typical route to Florida takes it along the Tennessee and Ohio Rivers, then onto the Mississippi River to the Gulf of Mexico and on to Florida's east coast, 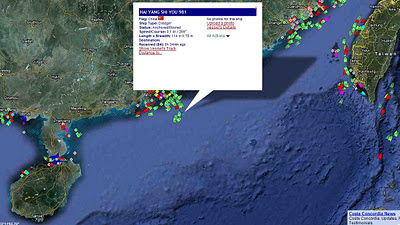 CNOOC Ltd, CNOOC's listed arm and the country's near monopoly offshore player, is preparing to drill its first-ever deepsea well in the northern part of the South China Sea around the beginning of 2012 -- some six months behind an earlier plan. CNOOC geologists said in September that they have identified several major oil and gas structures through advanced seismic surveys, largely in two basins -- Qiongdongnan and Pearl River Mouth, both in the northern parts of the South China Sea.The mouth of the Pearl River forms a large bay in the southeast of the delta, the Zhujiang Kou. This bay separates Macau and Zhuhai from Hong Kong and Shenzhen. CNOOC Ltd would be using "Offshore 981", China's first home-made semi-submersible deepsea rig that cost 6 billion yuan ($940 million) to build. back
Posted by kokstad at 17:48 No comments: 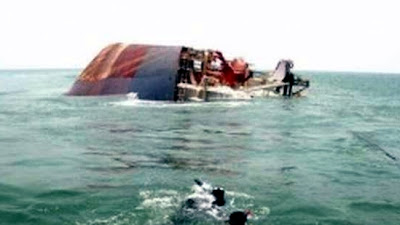 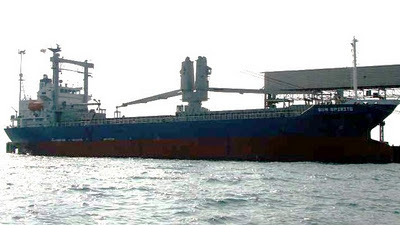 Carrying 9,900.7 metric tons of iron one from Leyte bound for mainland China , it sent distress signals as it was listing due to rough seas in the Pacific Ocean. General cargo vessel Sun Spirits IMO 9416953, dwt 10903, built 2007, flag Panama, manager Noma Shipping Co., Japan. The ship sank on January 21, 2012 due to big waves and the entire crew of the vessel at 12:30 hours local time was rescued before the ship sank Noma Shipping Co.Ltd. Nomakaiun Bldg. 4f. Imabari, Ehime 794-0017 Japan. Noma Kaiun K.K. here
Posted by kokstad at 15:10 No comments: 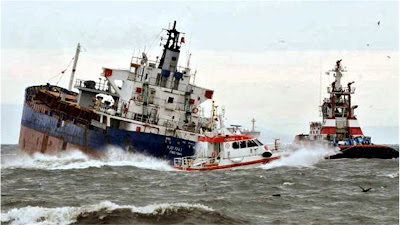 Sierra Leone has relaunched recently a user friendly flag for ship owners. Kayan I, a 5,644 deadweight tonne (dwt) Sierra Leone-flagged vessel, carrying empty containers collided with the M/V Adriablue cargo ship during strong winds in the southern part of the Bosphorus. The Adriablue sustained damage to its accommodation section. Tugboats towed Kayan I to a secure location off Zeytinburnu, in the Marmara Sea south of Istanbul, where with the aid of support vessels it was held afloat but was steadily sinking lower in the water, having been holed in the stern. In the midday Jan 20 Turkish rescuers evacuated the 13 crew of Kayan 1 and intentionally grounded the vessel to avoid sinking Year Built: 1971 Length x Breadth: 86 m X 15 m DeadWeight: 5644 t Speed recorded (Max / Average): 7.4 / 6.4 knots Flag: Sierra Leone [SL] Call Sign: 9LD2096 IMO: 7106176, MMSI: 667317000
Posted by kokstad at 17:06 No comments: 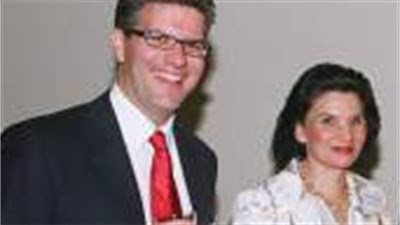 Doola No. 3: oil being drained from exploded hull 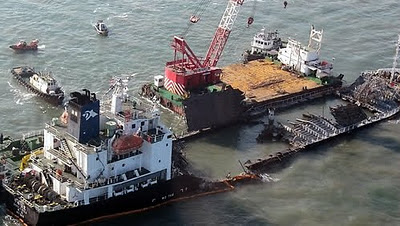 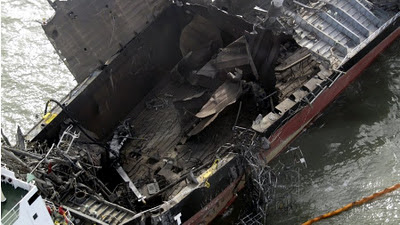 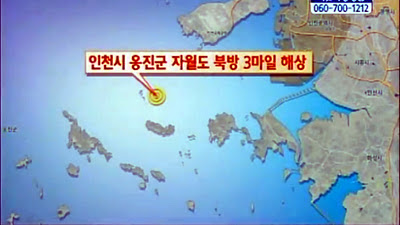 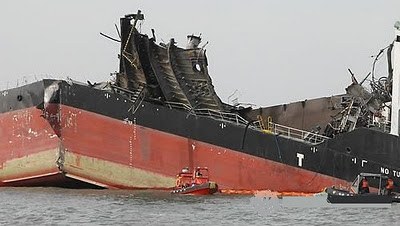 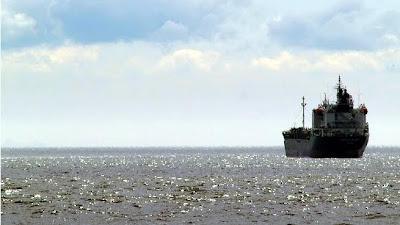 A crane ship is mobilized to transfer oil from the almost-submerged oil carrier Doola No. 3 in seas off Jaweol Island in Incheon on Jan. 16, 2012.
The product tanker exploded in waters off the port city of Incheon January 15, After departing from Incheon port, the ship headed toward Daesan port in South Chungcheong Province. Before the departure, the ship unloaded 6,500 tons of gasoline at Incheon.
The explosion of the 4191-ton vessel Doola No. 3 took place in waters three miles north of Jawol Island near Incheon around 8:05 a.m.,
The manager DOOLA SHIPPING CO LTD, Gang,Geon U/Gang,Ji Eon, CEO said that the explosion took place while gas was being drained from the oil tank. "The vessel usually transports diesel, but this time it carried gasoline. We are now examining whether it had any relation to the explosion,"
Before leaving port in Incheon, the ship had unloaded 6,500 tons of gasoline.

ex Sunrise Peony
Posted by kokstad at 15:51 No comments:

FAIRCHEM BOGEY imo 9423750 V7UB6 dwt 25390 2010 chemical tanker carrying just a partial load of methanol, was released yesterday afternoon, for an estimated $8 million.. A helicopter was observed hovering over the vessel yesterday in anticipation of making the ransom drop
more
more
Posted by kokstad at 08:55 No comments: 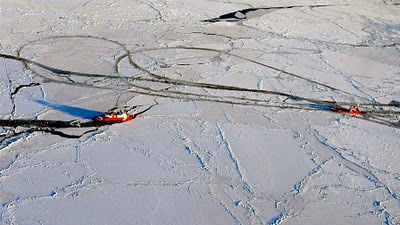 The 420-foot Coast Guard Cutter Healy creates a return path in the Bering Sea ice to assist the Russian-flagged tanker Renda 165 miles south of Nome, Alaska, Jan. 8, 2012. The cutter Healy and tanker Renda have been making way to Nome through the Bering Sea ice for two days to deliver more than 1.3 million gallons of fuel Nome. The fuel could arrive in Nome sometime around Sunday, depending on the progress through the ice. Vitus Marine CEO Mark Smith says his team is putting their efforts towards the final delivery in Nome.
8129618 RENDA UFFA Tanker 4999 1984
Posted by kokstad at 19:22 No comments: 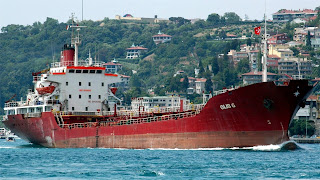 The chemtanker OLIB G, Malta-flag, Frio Maritime S.A. Greece, , with a crew of 18 (15 Georgians and 3 Turks), was released after the $3 million ransom was dropped onto the ship

previously
Posted by kokstad at 09:21 No comments:

An investigation into the grounding and breaking up of the Rena, a Liberian-flagged ship owned by the Greek shipping firm Costamare, is ongoing. The ship's captain and navigation officer, both Philippine nationals, will next month face criminal charges relating to operating a vessel in a dangerous manner and allowing the release of toxic materials.
Posted by kokstad at 10:39 No comments:

Prosecuting the pirates of the Iranian-flagged ship, 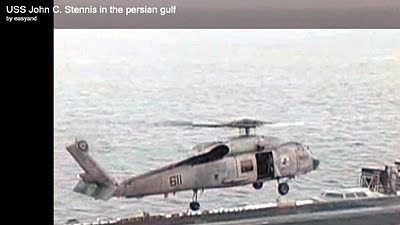 NCIS's Schminsky said the Iranian boat's captain thanked the U.S. for assistance. "He was afraid that without our help, they could have been there for months," the U.S. team gave the crew food, water and medical care, and on January 6 they moved the captured pirates to the Stennis. They will remain there while the U.S. considers options for prosecution and consults with other nations that have joined forces against piracy.

"Sadly, this is not a new thing," Nuland told reporters, citing more than 1,000 pirates picked up at sea who are under prosecution in some 20 countries. "So this is always a question of where to send them and who will do the prosecution."
previously
Posted by kokstad at 08:58 No comments:

At approximately 12:30 p.m,January 5, an SH-60S Seahawk from the guided-missile destroyer USS Kidd (DDG 100) detected a suspected pirate skiff alongside the Iranian-flagged fishing dhow Al Molai. The Navy took custody of the pirates under Josh Schminky, a Navy Criminal Investigative Service agent aboard the Kidd. The next morning when they were transferred to the USS John C. Stennis where the matter will be reviewed for prosecution. The pirates currently remain on the Stennis. The John C. Stennis Carrier Strike Group is conducting maritime security operations in the U.S. 5th Fleet area of operations
Posted by kokstad at 14:52 No comments: 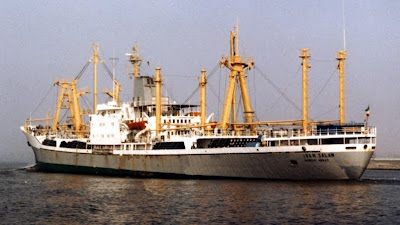 It's unclear why the pirates abandoned the boat, but it seems that they weren't expecting a ship carrying livestock. “The boat carried 3620 livestock, and it appears the pirates thought the boat was carrying only goods – so they thought to use it to mount attacks from – but they didn't want to deal with the livestock, the hijackers found the Savina too heavy to use as a mothership for launching attacks.

The Savina al-Salaam is now on course for Oman.

[earlier]Livestock carrier said to be named Savina Al-Salaam,and owned 'by India', has 16 crew. All are Indian. The boat also carried four Somali passengers, three women and one man, all have Oman visas, The cargo was 3620 animals, livestock loaded at Bosaso Port. The name of captain is Naaji Hussien. They hijacked while the boat was at sea and heading to Oman," 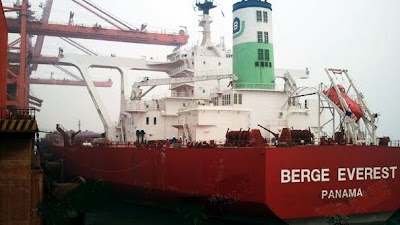 
The first of Vale's (VALE5.SA) giant dry bulk vessels to arrive in China has completed delivery of its iron ore cargo. Vale's ChinaMax from Dalian is heading back to Singapore - presumably for bunkers - then Brazil for the next cargo.

back
Posted by kokstad at 11:45 No comments: 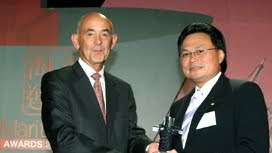 The crude carrier was rocked by three blasts on Thursday that erupted at the aft of the ship, damaging its engine room, living quarters and bridge. The Mercator chairman, HK Mittal, and the Anglo-Eastern Group chief executive, Peter Cremers, issued a statement in which they promised an investigation to "prevent a repeat of such a tragedy".
[AESM seminar on complacency] Marcel Liedts, COO of the Anglo-Eastern group, who explained the relevance of the theme of the seminar and stressed on how the company must protect itself from the scourge of complacency among seafarers.
The process of an MBO ( Management Buy Out) in 1998 and a subsequent merger with an established UK ship manager, Denholm Ship Management in 2001 were the key factors in establishing the present AE Group as a truly independent global based ship manager
Mr. Mittal acquired Mercator Lines Ltd. in 1988 . His personal ventures include a Ship Building Yard in Mumbai suburbs, a Healthcare unit & a Sulphuric Acid production plant in north India.

more
Posted by kokstad at 08:35 No comments: