Ahmed Abu Khatallah, accused by the U.S. as being the ringleader in the attack on the American mission in Benghazi, Libya, in 2012, has been brought to federal court in Washington, D.C.

Due to her draft and the shallowness of the Potomac River, the New York most likely stayed out at sea or somewhere in the Chesapeake Bay before transporting Abu Khattala from her flight deck via helicopter or V-22 Osprey to Washington.


And since Abu Khattala has to be transported directly from the ship into the District, that leaves only one airfield that services military aircraft: Joint Base Anacostia-Bolling.

Abu Khatallah is now on a slow boat to the United States -- a U.S. Navy ship in the Mediterranean, where he is facing interrogators.

They're taking him by sea, rather than by air, in order to give investigators "maximum time to question him," U.S. officials said.
Such interviews typically are done by the FBI-led High Value Detainee Interrogation Group, or HIG, that includes agents from multiple law and intelligence agencies.

The Bataan and the guided missile frigate USS Elrod (FFG 55) rendered assistance and provided food, water, medical attention and temporary shelter to 282 people after receiving a report that an Italian military marine patrol aircraft sighted six small vessels, one of which was sinking.

Sailors rush after removing chock and chains from an AH-1W Super Cobra before it takes off from the flight deck aboard the multipurpose amphibious assault ship USS Bataan (LHD 5). Bataan, with elements of the 22nd Marine Expeditionary Unit, is operating in the U.S. 6th Fleet area of operations to augment U.S. Crisis Response forces in the region.
[May 29]


The U.S. military has ordered the amphibious assault ship USS Bataan, with 1,000 Marines on board, to move toward the Libyan coast, the Pentagon confirmed May 28, a day after American officials urged citizens to leave the restive country immediately.   The Bataan, wasn’t expected to be positioned off the Libyan coast. It more likely would remain in the region, and could move or respond quickly if called; it  had been taking part in military exercises in the Red Sea when it got notice to move into the Mediterranean Sea. The Marines based out of Moron are part of a crisis response unit focused on embassy security that was created after the attack on the U.S. diplomatic compound in Benghazi, Libya, on September 11, 2012, that killed U.S. Ambassador Christopher Stevens and three other Americans.
U.S. military officials did not say where the USS Bataan was located in the Mediterranean, but one dismissed reports that it was near the Libyan coast, saying it had only passed through the Suez Canal on May 27.

The USS Bataan Amphibious Ready Group is deploying to the Mediterranean Sea to aid international efforts in Libya.

The group leaves southeast Virginia onMarch 23. It will be relieving units from the USS Kearsarge Amphibious Ready Group. 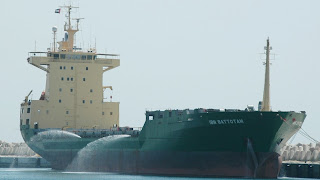 Sailors on a ship hijacked by Somali pirates nearly four years ago were finally released on June 7.   The exact circumstances of the release of the final Albedo crewmen is unclear. However, it is thought that the pirates may have been persuaded to accept a much lower ransom than originally expected.
The ship was among the cases receiving assistance from Colonel John Steed, a former British military attache to Kenya and United Nation's counter-piracy expert, who now runs the Secretariat for Regional Maritime Security, an organisation which specialises in dealing with Somalia's "forgotten" piracy cases.
last summer, the vessel sank in a storm, resulting in five of the crew drowning along with five of the pirates as they abandoned ship.
The 11 seamen released were then transferred to a ramshackle house near the Somali port of Hobyo, a notorious pirate haven, where they have been held ever since. They were expected to be flown to the Kenyan capital, Nairobi.
Guushaye, the pirate leader, and his gang initially demanded a ransom of $8-10M, but this was reduced to $2.85M for the ship and its crew. The shipowner appointed Ahmed Chinoy, chairman of Pakistan's Citizens Police Liaison Committee, to mediate between the pirates and the seafarers' families. After a campaign in Pakistan, Chinoy raised $1.1M, resulting in the release of Captain Jawaid Saleem and six other Pakistani crew members on 1 August 2012.   The pirate commanders "effectively ran off with the ransom money", sparking a dispute with the gang's investors, Hassan Hamarrow and Ahmed Sayruuq.

The MV ALBEDO is Malaysian flagged and owned, The vessel was carrying containers and was bound for Mombasa from Jebel Ali in the United Arab Emirates (UAE). MALAYSIAN-based shipping line Majestic Enrich has started its first service of a Malaysia-Singapore feeder connecting Penang, Port Kelang (Northport and Westport) and Singapore.
The service will deploy one of its two 1,066-TEU renamed Albedo from Cape Ann, with CAPE Arago as yet unassigned.
The Majestic Enrich Company was incorporated on January 25, 2008 as a private limited company under the name of Majestic Enrich Sdn Bhd in Malaysia by Iranian shipping executives and on April 3 changed its name to Majestic Enrich Shipping Sdn Bhd.
The carrier will provide services between Malaysia, Singapore and India.

United States plans to move the aircraft carrier George H.W. Bush into the Persian Gulf to provide Obama with options for possible airstrikes. Two destroyers from the ship's strike group, the Norfolk-based Truxtun and the Mayport, Fla.-based Roosevelt, are already in the area. The ships carry Tomahawk missiles, which could reach Iraq, and the Bush, stationed nearby in the North Arabian Sea, is carrying fighter jets that could also easily get to Iraq.

An alleged plot by Iraqi intelligence to assassinate Bush's father, former president George H.W. Bush, during his triumphal visit to Kuwait in April, 1993, at the direction of Saddam Hussein might have induced G.W. Bush to get Hussein, and we did. Has Saddam struck back at CV-77, George H. W, Bush? There have been at least two times when all 423 commodes in the ship’s 130 heads went offline. The sailors blame the ship’s vacuum system. But the Navy is blaming sailors for flushing “inappropriate material” down the toilets. A new vacuum collection sewage system that utilizes fresh water instead of sea water for flushing. This creates fewer long term corrosion problems, and reduces the quantity of sewage from water closets and urinals by ratio of 10 to 1.
Posted by kokstad at 19:08 No comments: The submarine has a load of 2,300 tons and can carry a crew of 57. It can operate at a maximum depth of 300 meters at a range of 6,000-7,500 nautical miles for 45 days and nights. The vessel is armed with a Klub-S cruise missile system with 3M-54E1 missiles bearing 450-kg warheads that have a firing range of 220 km. It also has a system of eight Strela-3 anti-aircraft missiles with a firing range of 6 km, six torpedo tubes, and other advanced military equipment.

China itself has adopted a strategy of building up a submarine force to counter a superior surface opponent (the US Navy). It’s entirely logical for Vietnam to adopt a similar approach vis-a-vis China, especially given that China’s lifeline of raw materials and exported goods from and to Africa, the Middle East, Europe, and parts of Asia passes right by Vietnam’s doorstep. Aside from Thyssen Krupp Marine’s U209 family of submarines, the Russian Kilo Class are the world’s most widely exported subs. They’re known for a level of quietness that’s significantly better than other Russian designs, and have been produced in the Project 877EKM, and the Project 636M “Improved Kilo” / Varshavyanka Class variant that Vietnam is receiving. Countries operating or ordering these submarines include Russia, Algeria, China, India, Iran, Poland, and Romania. Vietnam appears to have opted for a longer-range, higher capacity 3,000t submarine.

Local leaders and business people in Subic Bay confirm that both Philippine and American defense officials have been there recently to examine the options.

Under the terms of the new defense pact due to be signed April28, the U.S. is only allowed “rotational” access to existing Philippine facilities and cannot run its own bases. That means the Philippines will have to set up new facilities at Subic before the Americans can come in.


The frigate, BRP Ramon Alcaraz, sailed into the Philippines' Subic Bay, a former U.S. naval base.
BRP del Pilar was the country’s first Hamilton-class weather high endurance cutter (WHEC) acquired from the United States, in 2011. It will be used to patrol areas of the South China Sea near the Philippine coast that have become a major source of tension with Beijing.   The Philippines received the latest cutter for free under Washington's foreign military financing program, but spent about $15 million to upgrade its weapons and radar systems.   Hamilton-class ships have the basic modern technology the Philippine Navy needs to train its personnel, and has the size to install current and future weapons and sensors to keep it up-to-date for another decade.
Despite the removal by the US of its original radar systems, the PF-15 has new navigation and surface search radar and a new C&C/Common Operational Picture system. It also has a helicopter hangar and helideck for shipborne helicopter operations, and provisions for new radar and communications systems if the PN decides to install, provisions are also available to upgrade and up-arm the Hamilton-class ships.

The armed forces plan to buy radars, surveillance planes, fighters, and helicopters under the $1.7-billion plan.

Manila has opened talks to acquire a dozen new fighter jets and two frigates from South Korea. It has also ordered 10 coast guard ships from Japan and three more vessels from France.

He said the Hamilton-class ship will be deployed to Palawan and then to the Spratly Islands.

“It is to protect our interest in the natural resources operations that we have, more (specifically) in Malampaya…It is near Spratlys but basically, the objective is to protect our Malampaya (natural gas project)," he said.   the Navy would need to acquire “as many large-hull warships it can possibly get with its limited budget,” to show its presence and patrol the vast areas within the exclusive economic zone (EEZ).