Constantinos Tsakiris may have paid a total of $7.7 million in ransom for release of oil products tanker “Polar” dwt 72,825 hijacked en route from St. Petersburg and Kronshtadt to Singapore with a cargo of fuel oil.
back 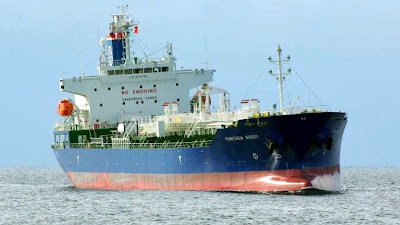 FAIRCHEM BOGEY imo 9423750 V7UB6 Chemical/Oil Tanker 25390 2010 chemical tanker sailing under Marshall Islands flag was in the designated anchorage area of Salalah port at Oman, awaiting berthing instructions when the hijackers managed to board the ship from a vessel that was ferrying cattle load.The ship prior to reaching Salalah had discharged cargo at Al Jubail, Saudi Arabia and from Oman port and was to proceed towards China. According to Anglo-Eastern Management officials, all crew members, “appear safe with no injuries.” Giving details about the hijacking, the shipping company officials disclosed that when Omani Coast Guard approached the vessel the pirates asked them to move away to avoid casualties to the crew.
Owner: Eurus Maritime SA
Manager: Anglo-Eastern Shipmanagement (Singapore) Pte Ltd
DocHolder: Anglo-Eastern Shipmanagement (Singapore) Pte Ltd

Query: why does a new chemtanker sail from Oman to China without a return load
Posted by kokstad at 15:14 No comments: 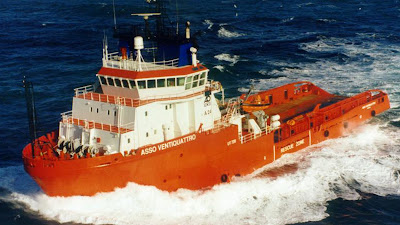 Col Fadlallah Haroun, a rebel military commander in the stronghold of Benghazi, said this marks the beginning of Operation Mermaid – a nickname for the capital city – an assault on Tripoli co-ordinated with Nato. Col Haroun said that weapons were assembled and sent by tugboats to Tripoli on August 19
This explains RAF striking in the harbor
back
Posted by kokstad at 09:03 No comments: 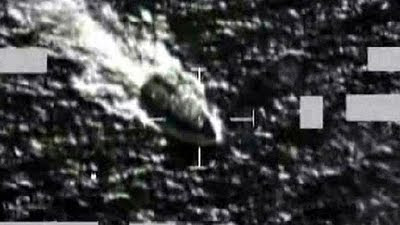 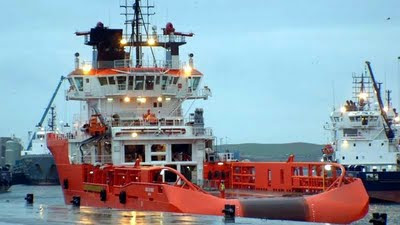 "Since it was clear these troops continued to pose a threat to the local population, the RAF patrol engaged the ship. A direct hit was scored." RAF pilots have obliterated a Libyan boat, containing dozens of Gaddafi troops, with a laser-guided bomb.

In March, an Italian tug was seized and released.
Asso 22
Augusta Offshore SrLowned by Naples-based shipping entrepreneur Mario Mattioli. The company’s tugs are working at the Mellitah oil rig, 120 kilometres from Tripoli and 30 from the Tunisian border.
Eni, Italy's oil and gas giant which has significant interests in Libya, had rented the tug for use at oil platforms off the coast.
La Cafiero Mattioli Finanziaria CA.FI.MA. S.A.p.A. è la società capogruppo,
Posted by kokstad at 09:46 No comments: 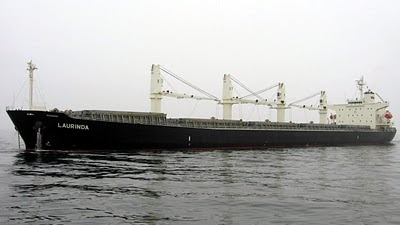 Ransomed after bargaining for 182 days, Maltese flagged. The ship is now on its way to a safe port.

2002:- The Shipping Corporation of India will continue to be a partner with the Iranian government in the Irano Hind Shipping Co after disinvestment.

According to senior officials, New Delhi has conveyed to Teheran that it stands committed to the joint venture even after its privatisation which is expected to take place by next month.

SCI has a 49 per cent equity holding in the joint venture company which has a majority holding by the state-owned Islamic Republic of Iran Shipping Lines.

Sources said the reassurance to the Iranian government has been informally conveyed since the joint venture was conceived as a government-to-government partnership way back in 1974.

The government has decided to offload 51 per cent equity in SCI in favour of a strategic partner while at the same time passing off 3.12 per cent shares to the employees. The government currently holds 80.12 per cent stake in the public sector shipping giant.
back
back2 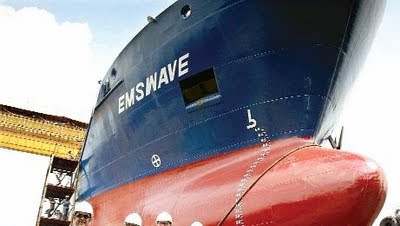 Western Marine Shipyard Limited (WMSL) launched EMS WAVE & EMS TIDE - the third pair of vessels from a series of twelve ordered by German buyer - Grona Shipping GmbH, Grona Managing Director Ebbe Prins, Fleet Manager Lass Ralf and East Wind, Germany, Managing Director Lars Brenneke, also representative of WMSL in Europe, were present at the ceremony. The two ice-class oceangoing vessels made by local firm Western Marine Shipyard have been handed over to their German importer.
back
back 2
back3
Posted by kokstad at 08:18 No comments: 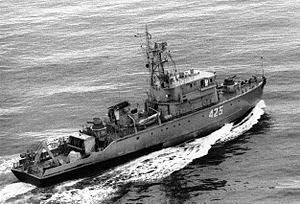 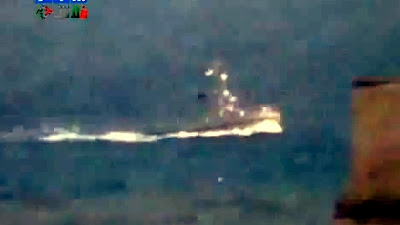 One witness, speaking by phone to Reuters, said: 'I can see the silhouettes of two grey vessels.


'They are firing their guns and the impact is landing on al-Raml al-Filistini and al-Shaab neighbouhoods." President Assad is from Syria's minority Alawite sect, while Latakia is majority Sunni with a large Alawite population.

Demonstrations against the leader during the five-month uprising against his autocratic rule have been biggest in Sunni neighbourhoods. Sunnis, which are a majority in Syria, live in Latakia’s urban core, while Assad’s minority Alawite sect, an offshoot of Shiite Islam, populates villages on the city’s outskirts, along with small minorities of Christians, ethnic Turks and other groups.


Syrian forces were using medium-range weapons and machine guns in their attack on the neighborhoods, according to the Local Coordination Committees of Syria,
Posted by kokstad at 07:45 No comments:

China has the largest maritime landmass among all Asia-Pacific countries. Its mainland coastline is 18,000 km long, compared with Thailand's 3,219 km, India's 6,083 km and the United States' 19,924 km.
back

Piracy stocks down too? 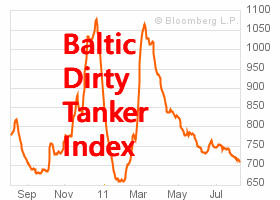 Hire costs for very large crude carriers, each able to haul 2 million barrels of oil, are at the lowest level in 10 years. Oil-tanker stocks in New York fell as the threat of a second U.S. recession in three years increased the risk that energy imports into the world’s largest economy may fall. The stock market is discounting problems ahead,” Manager of the world’s biggest shipping hedge fund, “It will be very bad for tankers.”
Oil settled below technical support at both $82.87, its low from last week, and $83.85, the 61.8 percent retracement of the rally from the 2010 lows in a Fibonacci study. Breaching those levels would send crude to test $76.17, a price that corresponds with the 76.4 percent retracement level on the Fibonacci chart.
Goldman Sachs Group Inc. maintained its 2012 forecast for Brent crude to average $130 a barrel and recommended investors hold a “long” trading position on December 2012 contracts. 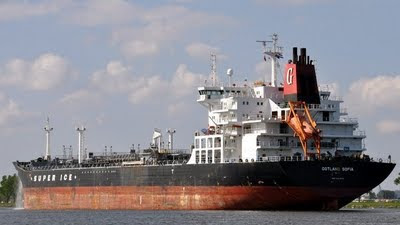 Pirates attacked two Panamanian-flagged tankers off the coast of Benin on August 3.

At the time, the vessels were undergoing a ship-to-ship transfer. The vessels involved were the mother ship ‘Golden Sofia’ and the daughter vessel ‘Aidin’.

Wisby Ship Management’s ‘Gotland Sofia’ was boarded by about 10 pirates, while she was undergoing an STS about 70 km from the Benin capital Cotonou.

The crew, consisting of four Swedes, 18 Filipinos and a Ukrainian, locked themselves in. The pirates tried to gain access to the area in which the crew had blockaded themselves, but left having ransacked the Swedish vessel. the daughter vessel ‘Aidin’ was initially attacked.

‘Gotland Sofia’s’ crew barricaded themselves in the engine room for six hours, while the pirates ransacked the vessel, smashing bridge windows and security doors. 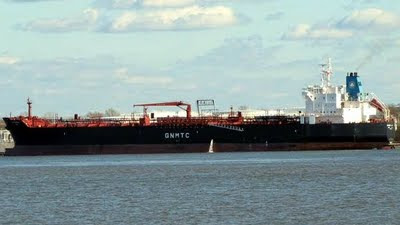 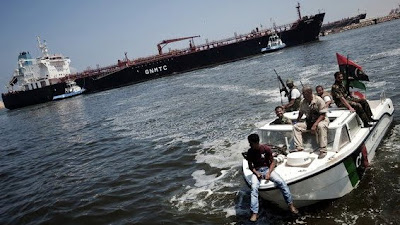 A Libyan tanker reported to have been seized by rebels is about to enter the opposition capital Benghazi, having been cleared by Nato ships enforcing an arms embargo on both sides, a Nato official told Reuters today.

Apparently rebels seized the Cartagena, which belongs to the Libyan government's shipping arm, off Malta on Tuesday night "with the help of special forces from a European state", according to the news agency. The ship is said to be carrying almost 40,000 tonnes of gasoline.
Posted by kokstad at 16:14 No comments: