Greek coast guard vessels were on November 28 searching for an Iranian tanker that disappeared after being refused a request to refuel off the island of Syros as it was suspected that the vessel was carrying Iranian oil in contravention of a European Union ban.
The Tanzanian-flagged Baikal, part of top Iranian tanker operator NITC’s fleet, approached Syros on November 27  in order to refuel but officials from local company Sekavin refused after they, along with customs officers, checked the documents accompanying the shipment of 146,000 tons of crude oil. The documents did not detail who would be the recipient of the fuel.
“We conducted an initial investigation in order not to break the law. In the end, we did not provide them with any fuel because it would be against the rules,” a Sekavin official told Reuters. “Regardless of its flag, the ship represents Iranian interests.”
Sources said that at 8 p.m. on Tuesday, the Baikal set sail from Syros and 17 minutes later, when it was heading toward Myconos, the vessel’s Automatic Identification System was switched off.
Customs officials on Syros notified the Financial Crimes Squad (SDOE), which does not have a vessel that can be used to track down suspects. As a result, the coast guard was called in. Authorities suspect that the Baikal was delivering the oil to a customer in Greece or the Balkans in contravention of an EU embargo.


Iranian owners of five dry cargo ships are taking steps to deregister the vessels in Hong Kong just days after the Marine Department sent a letter to owners of 19 Iranian ships asking them to register their vessels elsewhere.The owners who were sent the letters included Eternal Expert, which is the registered owner of the Alias, a 43,309 deadweight tonne handysize dry cargo ship.

Eternal Expert operates through Tehran-based Rahbaran Omid Darya Ship Management, which also manages 15 other Hong Kong-flagged ships. All are handysize vessels, specialising in carrying minor bulk cargoes such as fertilisers, ores and timber, and were built between 1984 and 1986.

The company and several key executives were the subject of tough restrictions imposed by the United States Treasury Department and European Union in October and December last year as part of wider sanctions against Iran.

US and European governments alleged the company was a front for Islamic Republic of Iran Shipping Lines, which has been accused of being involved in the shipment of components of weapons of mass destruction. 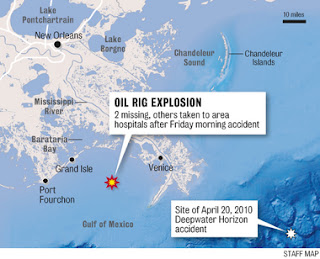 West Delta 32 platform went up in flames, with reports that two are dead, four have been airlifted out, and two are missing.

Black Elk Energy Offshore Operations, LLC engages in the acquisition, exploitation and development of oil and natural gas properties. The company has producing assets located offshore in U.S. federal waters, and Louisiana and Texas state waters in the Gulf of Mexico. As of December 31, 2011, it held an aggregate net interest in approximately 293,400 net acres under lease, as well as had an interest in 1,222 gross wells. The company also had estimated total proved oil, natural gas, and NGL reserves of 45.2 MMBoe; and estimated net proved oil, natural gas, and NGL undeveloped reserves of 19.5 MMBoe. Black Elk Energy Offshore Operations, LLC sells its natural gas and oil to marketing companies...
Posted by kokstad at 17:54 No comments:

Presently more than 400 merchant vessels are registered under Moldova flag. The Prime Minister of Moldova requested organizations to audit the existing fleet, three auditing companies from  Greece, Panama and the UK are to be employed for the task.   Moldova government is considering a new law regulating the Moldova Flag Registry, all the new applicants are to be approved by Ministry of Foreign Affairs. The Moldova flag is a known and popular flag of convenience.

Begonia, which is managed by Tehran-based Soroush Sarzamin Ship Management Co., received a Moldovan flag in June. The Begonia has changed names and flags three times in four years,