Liaoning: generally considered by military experts to be a training carrier

Oct 14, 2015    Foreign Ministry spokeswoman Hua Chunying, when asked if China had or would send forces to Syria, told a daily news briefing that she had also noticed the reports.
"I can tell you that as for China's warships, for example the Liaoning, whether it has gone to join, for this issue, as far as I know, there is no such plan. At this time the Liaoning is in a phase of carrying out technical training and military exercises."   The Liaoning is generally considered by military experts to be a training carrier, while China builds its own carriers and works out how to operate them.

[February 2
The authority in Changzhou, in eastern Jiangshu province, boasted on social media on February 1 that a local firm had won a contract to supply electrical cabling for  China's second aircraft carrier.   It later deleted the post, but not before it had been widely circulated. 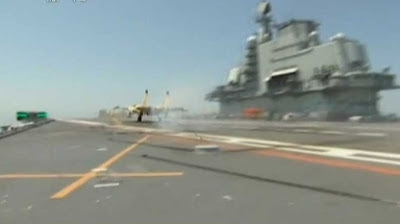 Photo shows a J-15, China's first-generation multi-purpose carrier-borne fighter jet, taking off from the deck of the Liaoning, China's first aircraft carrier, on June 29, 2013.   Jane's Fighting Ships had previously stated that the ship would be named Shi Lang and assigned pennant number 83 but at the commissioning ceremony, the carrier was officially named Liaoning. 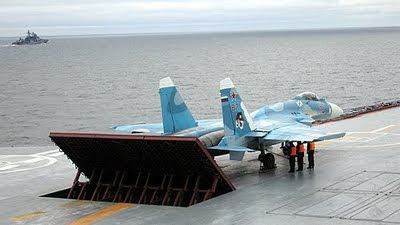 [September 25 2012]
China's first aircraft carrier was delivered to the Chinese Navy at the port of Dalian on September 23, 2012. The carrier, built on former Ukrainian vessel Varyag, is capable of carrying around 30 fixed wing fighters and helicopters and a crew of about 2,000. And the hull number, "16," has been painted on the ship recently. [earlier]China has renovated the Varyag, an incomplete Kuznetsov-class aircraft carrier purchased from Ukraine, and carried out the first trial navigation in August 2011. China seems to be advancing training of carrier-based aircraft pilots and development of the J-15, a carrier-based fighter. In addition, it has constructed a structure on land which replicates an aircraft carrier and is developing an airfield for take-off and landing training. Based on these facts, it is believed that China is now earnestly advancing research and development on technologies necessary for possession of aircraft carriers.
In view of these developments in the modernization of the Chinese Navy, it is believed that China is trying to build capabilities to conduct operations in more distant areas.

In recent years, when environment surrounding military has greatly been changing including advancement in military specialization and diversification of missions according to the modernization of military, some see that relations between the CCP leadership and the People's Liberation Army (PLA) has been getting complex and others see that the degree of military influence on foreign policy decisions has been changing13. The situation attracts attention as a risk management issue too. Japan, Defense White paper, July, 2012


[6/8/11]The carrier was constructed in the 1980s for the Soviet navy but was never completed. When the Soviet Union collapsed, the rusting hull of the Varyag sat in dockyards in Ukraine.
A small Hong Kong company called the Chong Lot Travel Agency Ltd.it said wanted to turn it into a floating casino in Macau and purchased it at auction for US$20 million. The total cost of acquiring the hulk was over $30 million USD: $25 million to the Ukrainian government for the hull, nearly $500,000 in transit fees, and some $5 million for the towing.
The head of China's General Staff of the People's Liberation Army (PLA) has confirmed that China's first aircraft carrier is under construction.
In fact, China faces severe ocean threats, Qi Jianguo, Assistant Chief of General Staff, says, China is now in the oceans are facing the pressure of several directions, to see how the situation changes. You see, now that the sea, the island chain, the South China Sea issue, the Taiwan Strait issue, the East China Sea issue, the question the Yellow Sea, the world can there be a large country like China is facing such a complex marine problems?" Hong Kong Commercial Daily

Gen Chen Bingde refused to say when the carrier - a remodelled Soviet-era vessel, the Varyag - would be ready.
Posted by kokstad at 10:42 No comments: