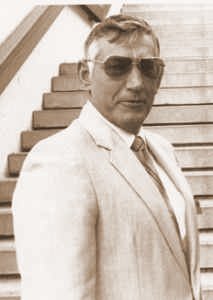 Tanzania’s shipping registry is managed by a company called Philtex Corporation, with a head office in Dubai, and offices in a number of other locations, including Austin, Texas, where the contact person for Philtex Marine Services{USA} is Chad Warren, a U.S. citizen, says he is now based. Reached by phone in Texas this week, Warren described himself as a deputy registrar of the Tanzanian shipping registry, but when asked to explain the Iranian vessels he said “I did not register any of these ships.”

Warren added that he has no access to the records of these Iranian ships, and said that their apparent persistence on the Tanzanian registry might be due to a policy of waiting for a 90-day provisional registration period to expire, rather than simply striking them off. Asked how that would explain the NITC tankers showing up on Lloyd’s as newly flagged after the end of August, he said, “I don’t know exactly what is going on.” Asked why the Iranian ships at issue would be using call signs identifying them as Tanzanian, he said their use of these call signs would be “invalid.”


Secretary of State Hillary Rodham Clinton said October 11 the precise details of the deadly Sept. 11 attack on the compound in Libya still remain unclear.
One month after the attack that killed the U.S. ambassador to Libya and three other Americans, Clinton said the administration is committed to uncovering the truth about what happened.
"There is much we still don't know and I am the first to say that," Clinton told reporters at the State Department after meeting with Italian Foreign Minister Giulio Terzi.


Over the past two months, at least three Iranian-linked container ships, all blacklisted by the U.S. Treasury, have called at the Libyan port of Benghazi. One of them, the Parmis, put in at Benghazi Anchorage as recently as August 30. Since then, it has been meandering along the Libyan coast, going west to the Libyan port of Misurata, then doubling back east this week, past the Libyan port of Sirte. For the Parmis, this is a voyage that began in early August at the Iranian port of Bandar Abbas, thence to the United Arab Emirates, then Egypt, and on to Libya. This repeats a similar circuit, in which the Parmis sailed in June from Iran, calling in early July at Benghazi. That’s not to suggest any ties between Iran, or the Parmis in particular, and Tuesday’s attack on the U.S. post in Benghazi. The full tale of who master-minded or helped stage that armed assault remains to be uncovered here 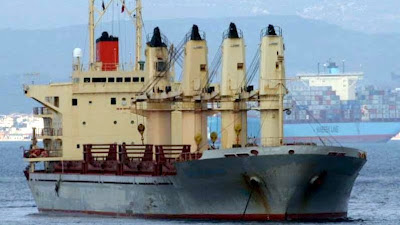 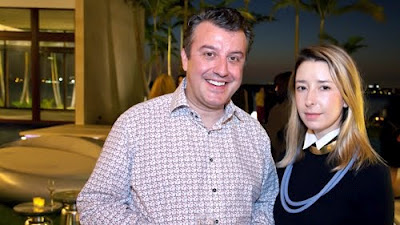 the ransom amount was $2.3 million. The pirate group initially wanted $9 million, but negotiations resulted in a lower amount. The ship's owners, Free Bulkers SA, did not comment about the ransom payment claims.

[February 2]UKMTO received a call from the CSO of Free Goddess stating that he could not contact the vessel. The Free Goddess was en route from Adabiya, Egypt to Singapore, carrying 19,475 mt of steel cable with a crew of 21 Filipinos on board. The vessel is not responding to any calls. UKMTO Dubai also administers the Voluntary Reporting Scheme, under which merchant vessels are encouraged to send regular reports, providing their position/course/speed and ETA at their next port whilst transiting the region bound by Suez, 78°E and 10°S. UKMTO Dubai subsequently tracks vessels and the positional information is passed to CMF and EU headquarters.
9107045 FREE GODDESS A8UM4 Bulker 22051 1995
CEO Ion Varouxakis founded FreeSeas in 2004
Ion G. Varouxakis
Chairman of the Board
of Directors, Chief Executive Officer and President FreeSeas, Inc.
Piraeus , GR
Sector: SERVICES / Shipping
Officer since January 2006
39 Years Old
Ion G. Varouxakis is one of our founders and is the Chairman of our board of directors. He also serves as our President and Chief Executive Officer. In 2003, Mr. Varouxakis founded Free Bulkers, the beginning of a single-vessel, self-financed entrepreneurial venture that led to FreeSeas founding and NASDAQ listing in 2005.
Under Mr. Varouxakis? leadership, FreeSeas has grown to be a leader in the Handysize and Handymax segment in the U.S. capital market. Prior to founding Free Bulkers, Mr. Varouxakis held since 1997 management positions in private shipping companies operating in the drybulk sector.
Mr. Varouxakis holds a candidature degree in law from the Catholic University of Saint Louis in Brussels and a bachelor of science degree in economics from the London School of Economics and Political Science. Mr. Varouxakis is a member of the Hellenic Committee of the Korean Register of Shipping and is an officer of the reserves of the Hellenic Army. Mr. Varouxakis is the brother of Alexis Varouxakis, our Secretary.
Compensation for 2006
Salary $150,000.00
Bonus $0.00
Restricted stock awards $0.00
All other compensation $0.00
Option awards $ $0.00
Non-equity incentive plan compensation $0.00
Change in pension value and nonqualified deferred compensation earnings $0.00
Total Compensation $150,000.00

FreeSeas Frees Up Cash For Acquisitions 03.24.09
FreeSeas has secured waivers on its debt and refinanced an existing credit facility, and with its newfound financial freedom, it wants to do some bottom feeding.
FreeSeas (nasdaq: FREE - news - people ) Chief Executive Ion Varouxakis made a bullish call on the dry-bulk market, saying the waivers on $153.0 million in debt will allow it to take advantage of plunging asset values in the market. The company also refinanced the existing credit facility for its vessel the Free Maverick. "These modifications to our loan agreements, coupled with recent charter announcements, have provided FreeSeas with a greater level of operational and financial flexibility," said Ion Varouxakis.
"To a lesser extent, we believe these waivers position us for growth as we see unprecedented opportunities for acquisitions at current market prices."
FreeSeas is taking a more aggressive stance than its rival Diana Shipping, which last month said it would wait until asset values dropped further before jumping into any acquisitions.
Meanwhile, FreeSeas said it agreed with Hollandsche Bank - Unie N.V. to refinance a balloon payment of $27.1 million due Aug. 1 on the loan for its ship Free Maverick. The balloon payment will be replaced by a new three and a half year facility, which is payable through 13 quarterly installments of $600,000 beginning on Aug. 1, and one installment of $19.3 million payable on Nov. 1, 2012, the company said.
Home port: Monrovia Class society: Bureau Veritas Build year: 1995 Builder*: Saiki Heavy Industries Saiki, Japan
Owner: Freeseas - Athens, Greece
Manager: Free Bulkers - Athens, Greece Officials of the Ghana Ports and Harbors Authority (GPHA), which runs Tema Port, seized the ARA Libertad on the orders of a United States court and said they would only release it after a court order to do so.The Argentine training ship has been seized in Ghana, on a court order obtained by a US bondholder, who lost money when Argentina defaulted on its debts a decade ago.

On Octoer 2, a Ghanaian court issued an injunction and interim preservation order to NML Capital Ltd, a subsidiary of Elliott Capital Management.

Background
In 1994 the Republic of Argentina issued a series of sovereign bonds. The bonds contained a clause dealing with jurisdiction and immunity in relation to claims on the bonds and were subject to New York law. Between June 2001 and September 2003 NML Capital Ltd bought a number of bonds at between 55.37% – 62.82% of their face value. In November 2003, NML declared “events of default” based on the subsequent failures by Argentina to pay interest as it fell due on the bonds. Argentina sought to restructure its external debt to a sustainable level in 2005 but NML refused to take part in any restructuring offer, instead bringing a claim in New York seeking payment of the principal amount of the bonds that had fallen due (US$284,184,632.30). On 18 December 2006 the US District Court of the Southern District of New York entered judgment against Argentina in favour of NML for the sum claimed.
Posted by kokstad at 09:33 No comments: 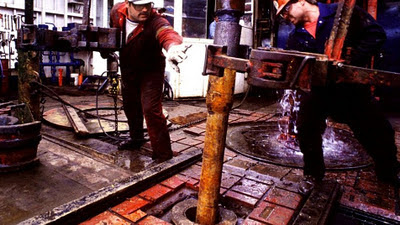 Brazil has lifted an injunction to suspend offshore drilling by contractor Transocean, relating to a November 2011 oil spill in the Frade offshore field northeast of Rio de Janeiro.

Chevron had contracted Transocean's Sedco 706 rig, but Brazil's oil regulator ANP said in a July report that Transocean had no responsibility for the spill.

Fischer accepted ANP's argument that losses in revenue to Petrobras and the government in royalties would amount to more than 6.7 billion reais ($3.8 billion) over two years if Transocean's rigs were suspended from operating."The original injunction was groundless and targeted Transocean unfairly," a Transocean spokesman said. "The company and its employees were completely exonerated by ANP's investigation which concluded that the leak resulted from geological factors and was totally unrelated to the actions of the Transocean rig crew."

The Transocean ban is related to a lawsuit seeking nearly $20 billion from it and Chevron Corp .
The ban on Transocean remains in force in Frade. Chevron and Transocean say they were not negligent in the spill and are fighting the lawsuits and related criminal charges.
more
read
[August 3]A Brazilian court on August 1 ordered Chevron Corp. (CVX) and Transocean to halt their activities in Brazil in 30 days or face daily fines of 500 million Brazilian reais ($250 million). The court decision is part of ongoing cases related to a drilling accident last November at the Chevron-operated Frade offshore oil field. The accident caused an estimated 3,700 barrels of crude to seep from cracks in the seabed. Chevron voluntarily halted production at the field in March, when a second set of seepage was discovered at the field.
Magda Chambriard, head of the ANP, said during a Senate hearing that irregularities in the company's activities found by a Brazilian court were "light" and they "weren't reason for the discontinuing of the company's operations," according to comments posted on the Senate's website.

[December 12,2011] Brazil sues Transocean for $10.6 billion:The suit, which includes Chevron, could jeopardize oil companies' plans to step up their presence in Brazil after the discovery of huge offshore reserves several kilometers (miles) beneath the ocean floor estimated at 50 billion barrels or more.

Reaching that oil will be technically challenging but Brazil expects it will push its crude output to 7 million barrels a day by 2020. That could see it challenge the United States for the rank of world No. 3 oil producer after Russia and Saudi Arabia.

It also risks alarming foreign oil companies eager to expand in one of the world's fastest-growing oil frontiers, where state-controlled oil company Petrobras accounts for more than 90 percent of the output, and government leaders are moving to assert even greater control of natural resources.
Posted by kokstad at 08:32 No comments: