Aboard the future USS Zumwalt,  one of the main turbine units was started for the first time on September 23.   The 610-foot-long warship will be the first electric-drive surface combatant built for the U.S. Navy since a line of smaller destroyer escorts in the 1940s.

[November 25][December 21 2013 PCU Zumwalt: formal launch put off to Spring]
Defense Secretary Chuck Hagel said the not-yet-launched Zumwalt-class destroyer he toured here today “represents the cutting edge of our naval capabilities.” The ship, now known as the Pre-Commissioning Unit, or PCU, Zumwalt, will become the USS Zumwalt, named for former Navy Adm. Elmo Zumwalt. Officials said the ship is about a year away from joining the fleet.

It features an unusual wave-piercing hull, electric-drive propulsion, advanced sonar and guided missiles and a gun that fires rocket-propelled warheads as far as 100 miles. Unlike warships with towering radar-and-antenna-laden superstructures, the Zumwalt will ride low to the water to minimize its radar signature, making it stealthier than other warships.

The ship was envisioned for shore bombardment, but its size and a power plant that can produce 78 megawatts of electricity — enough to power 78,000 homes — make it a potential platform for futuristic weapons such as the electromagnetic rail gun, which uses a magnetic field and electric current to fire a projectile at seven times the speed of sound.

With so many computers and so much automation, it will need fewer sailors, operating with a crew of 158 — nearly half the complement aboard the current generation of destroyers.
Posted by kokstad at 10:34 No comments:

China National Offshore Oil Corp. (CNOOC) has announced its first deepwater gas field discovery in the South China Sea,. The discovery was made by HAI YANG SHI YOU 981 MO: 9480344 .

The newly discovered gas field, dubbed Lingshui 17-2, is located 150 kilometers south of Hainan — in other words, not in a disputed area of the South China Sea. 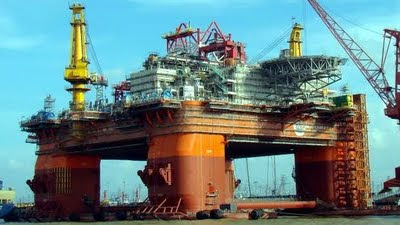 Marine Oil 981, HAI YANG SHI YOU 981, 船主, will begin testing this week for the first time in preparation for its deployment to the South China Sea in July. 48.1 miles Northeast bearing 66° from Zhoushan, Zhejiang, China
The deployment of the semi-submersible platform comes as tensions rise in the hotly contested South China Sea. Shortly after China announced the completion of the platform — which took more than three years to build and cost more than $900 million. The oil rig is 114 m long, 140 m high and weighs 31,000 t. According to China State Shipbuilding Company, the deepwater platform is capable of drilling in waters up to 3,000 m deep, and of using a drill that goes as deep as 12,000 m.
China's ambassador to the Philippines, Liu Jianchao, has insisted China's intentions were peaceful and said that China was not looking for oil in the disputed waters and, therefore, no other country should. Philippine Daily Inquirer
2009 China Waigaoqiao Shipbuilding H1188 CNOOC Hai Yang Shi You 981 ABS Semi Sub Drilling Rig IMO: 9480344

back
Posted by kokstad at 19:51 No comments:


An attempt to hijack PNS Zulfiqar [a frigate purchased from China and inducted in July 2009] was stopped by guards.
The attack was carried out by the Tehreek-i-Taliban Pakistan (TTP), which said it had inside help.
Karachi's naval dockyard is about four kilometres from the mouth of Karachi harbor.

Pakistan Navy — a 31,000-man branch of the military – has tried to keep the investigation in its sole control without sharing on the record information with civilian agencies 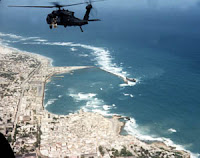 Negotiations between the pirates and the ship's Saudi owners are being conducted through an interpreter on a satellite phone using an outside company that specialises in dealing with kidnaps and ransom demands. Blackwater Maritime Security Services, a division of the firm active in Iraq, is said to be sending it's 183 ft McArthur former NOAA research vessel to the Gulf of Aden from its base in Virginia.

Armed Islamic militants were angry pirates had attacked a ship owned by Muslims. The Sirius Star is owned by a Saudi-controlled company. "The Islamists say they will attack the pirates for hijacking a Muslim ship," an unnamed local tribal elder said. Militants have entered the port of Haradheere close to where the ship is moored . It is common for Somali pirates to booby-trap vessels they have seized raising the prospect of the Sirius Star being blown up if Islamists start a firefight with those who seized her. Meanwhile, unknown armed young men have started a fierce firefight in the capital. After the Mogadishu attack, another resident Dahir Mohamed said he had seen the bodies of 15 young men.
"They were unfamiliar faces in the our district, so we think they were the insurgents." The Islamists have not commented on the incident.
Posted by kokstad at 15:53 No comments: