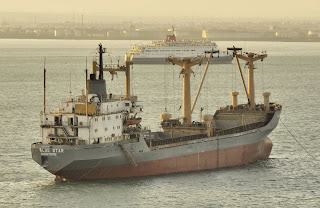 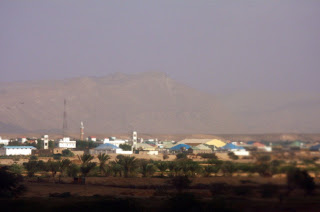 Puntland, a semi-autonomous region home to a third of the Somali population. A lively port city, Bosasso is the new Algiers. Puntland caters to its pirate population, even opening restaurants to feed the pirates’ hostages and crews. The pirates are thought to bring in close to 30 million dollars a year, and they often devote it to lavish lifestyles. Recreational drug use among the pirates is common, “They wed the most beautiful girls, they are building big houses, they have new cars and new guns.”
Posted by kokstad at 08:56 No comments: 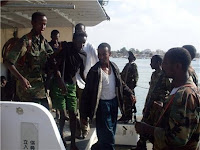 The US Navy Fifth Fleet said on March 3 it has released nine Somalis suspected of piracy in the Gulf of Aden after it did not find enough evidence to prosecute them.
The nine were arrested on February 12 after an Indian-flagged vessel sent a distress call reporting that it been fired upon at night by a small skiff and that pirates were attempting to board, the Bahrain-based US Naval Forces Central Command said in a statement.

The U.S. Navy on March 3 released nine of the 16 suspected pirates it holds, saying there was a lack of evidence to prosecute the men, according to the Navy.
The nine men had been held on a Navy-contracted cargo ship since being detained in a Feb. 12 incident in which the Indian-flagged Motor Vessel Premdivya sent a distress call stating the ship had been fired upon at night by a small skiff.

The nine men have been turned over to the Puntland Coast Guard. Puntland is a semi-autonomous region of Somalia and self-proclaimed Somali state that includes the point of the Horn of Africa.

U.S. forces handed over to authorities in northern Somalia on March 2 nine pirates they captured after capsizing their boats at sea, a local official said.
The handcuffed men, paraded before reporters in the enclave of Puntland, are expected to appear in court this week, said Mohamed Said, Puntland's deputy police commander.
Posted by kokstad at 20:12 No comments: