Just days after joining the EU Operation Atalanta antpiracy mission, the German frigate Karlsruhe yesterday foiled an attack in the Gulf of Aden by Somali pirates

The frigate was notified yesterday morning that the Egyptian bulk carrier Wadi Alarab was under attack. Although the bulker was not directly under Operation Atalanta protection, the frigate sent one of its two helicopters in response.

The helicopter fired a warning round and the pirates gave up the attack, though not before wounding one of the bulker's 31 crew members.

Subsequently boats from the Karlsruhe captured six of the pirates. They were disarmed but later released on orders from Berlin. Current German law and rules of engagement apparently only permit pirates to be detained when there has been injury to German property or persons.
Posted by kokstad at 15:14 No comments:

Zhenhua 4 crew locked themselves in their cabins and radioed for help. A warship and two helicopters came and fired on the pirates, but did not kill them, it said.

Chinese state media said a "multilateral" force with helicopters hovered over the ship and successfully fought off the pirates.
Posted by kokstad at 10:51 No comments: 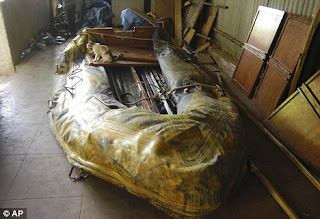 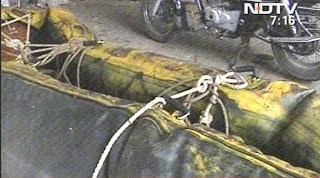 There were 10 men aboard the boat who appeared to be in their early 20s, and eight of them disembarked carrying backpacks. all the 10 gunmen were Pakistani because they spoke Punjabi or Punjabi-accented Urdu. Measuring about 3 meters long, the boat had a new Yamaha 40-horsepower outboard engine. The vessel bore Arabic characters used in writing Urdu. Fuel cans and life jackets were found in the boat.
Posted by kokstad at 08:15 No comments:

The 45-foot fishing boat Kuber left its home port on India's west coast and headed for the abundant waters near the Sir Creek, a river that runs into the sea at the fuzzy aquatic border between India and Pakistan. Authorities from both sides regularly seize boats, imprison the crew and then negotiate over releases, the routine interception of boats raises questions about how the terrorists managed to avoid detection before they hijacked the Kuber. more
Posted by kokstad at 08:31 No comments: 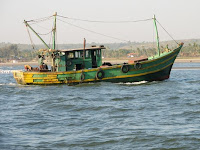 Ajmal had told interrogators that he and his accomplices were put up in a house in Karachi's Azizabad locality for a while before being asked to board a mid-sized vessel from Kajhar Creek. They travelled 20-25 km southwest before they were picked up by a group of Pakistanis on board a ship plying under the registration of Al Hussaini.
Posted by kokstad at 09:34 No comments: