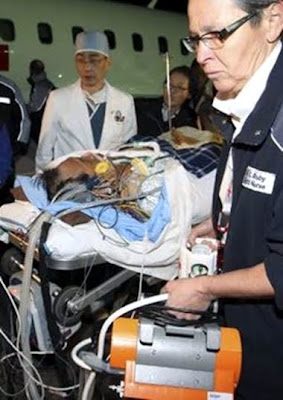 Seok Hae-Kyun, 58, the skipper of the chemical carrier Samho Jewelry, which had been captured by pirates in the Arabian Sea, was shot repeatedly as South Korean navy commandos stormed the vessel on January 21. Seok underwent two operations in an Oman hospital and was flown home Saturday and is currently in intensive care at a hospital in Suwon, Gyeonggi Province. Seok's abdominal organs are badly damaged. "It's hard to tell how many bullets are still in his body, because many bullet fragments are scattered in the arms as well." bullet fragments

In Busan the five, including a man identified as Arai Mahomed, have been questioned in the presence of state-appointed lawyers, a lengthy process that involves translations between Somali, English and Korean.
They also told interrogators that all 13 pirates spent 15 days together in a training camp to plot taking over the freighter.

"Because of conflicting testimony by the pirates, the investigation focused on who shot Captain Seok."

He said Mahomed denied responsibility, although some of the crew pointed the finger at him. After intense interrogation Jan 31, the pirates were taken into a detention center and spent their second night in Korea. An official at the South Regional Headquarters of the Coast Guard said they were served steamed rice, soup and other side dishes for dinner at 7:25 p.m., emptying their plates.

They then went to bed at around 9 p.m., the official said, adding that all five men slept well without waking up in the middle of night. “The pirates seem to be relaxed and do not appear afraid at all. We will do everything we can to keep them protected here,” he said.

"We have evidence supporting the fact that one of the five pirates shot Captain Seok," chief investigator Kim Chung-Gyu said. The five could face life in prison if convicted of shooting the Samho Jewelry's captain. If he were to die, they could theoretically be sentenced to death, although the country has carried out no executions since 1997. Somalia has agreed to accept the bodies of the other pirates, the spokesman said.
Posted by kokstad at 19:51