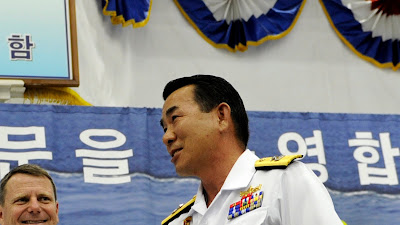 USS McFaul followed Iceberg 1 for the next 36 hours, until it turned towards the coast of Somalia.the pirates having painted over its name and re-named it Sea Express

"We cannot be sure what the pirates plan was if they had not been interrupted. The vessel may have been on its way to either assist other pirates in distress, or look for another merchant vessel to attack," said Republic of Korea Rear Adm. Beom Rim Lee, [Lee Beom-rim] commanding officer of Combined Task Force 151, the Combined Maritime Forces' counter-piracy task force that operates in the Gulf of Aden and Somali Basin
Posted by kokstad at 11:16