In a siege that lasted nearly two weeks, forces of Somalia's semiautonomous Puntland region raided a hijacked ship Sunday and safely rescued 22 hostages who had been held captive for nearly three years, authorities said.
The Puntland government said their forces captured the Panama-flagged MV Iceberg 1, which was docked near the Gara'ad coastal village in Mudung region.
Hassan Abdi, a pirate commander, who was in touch with the ship's hijackers, said eight pirates on board the vessel were able to escape as Puntland soldiers closed in.
"None of us has been harmed," Abdi said. Puntland authorities said they had laid siege to the MV Iceberg 1 on Dec. 10.

A  hostage rescue attempt failed of  MV Iceberg 1, being held hostage by Somali pirates for almost 3 years.
Puntland Maritime Police Force (PMPF) clashed with pirates  attempting to transport weapons and ammunition to the pirates on board the Iceberg 1 vessel, resulting in 3 pirates killed and 3 other pirates captured. 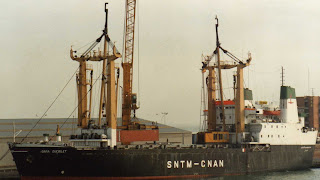 Panama Flagged, Iceberg 1 is a Roll on Roll Off vessel with deadweight of 4500 tonnes. The vessel, with a crew of 24 and carrying a mixed cargo of general mechanical equipment, was bound for Jebel Ali in the UAE when hijacked. The crew consist of persons from Yemen, India, Ghana, Sudan, Pakistan and the Philipines.

Reports have been received by EU NAVFOR that the MV Iceberg 1 has been hijacked 10 nautical miles off the port of Aden, Yemen, outside the International Recommended Transit Corridor (IRTC).
The last contact with the vessel was the master stating to his owner that pirates were onboard. The vessel appears to be heading towards the Somali coast. EU NAVFOR units are monitoring the situation.


Iceberg I (12-2007)
IMO: 7429102
according to Lloyd’s List Intelligence is associated with Azal Shipping & Trading of Dubai.
Azal Contracting & Oil Services Corp. is a private firm with many activities specialized in different field of services and investment . AZAL utilizes both its assets and resources efficiently and takes full and early advantages of technical advances and markets needs. Our philosophy is based on blending individuals to form strategic partnerships with multinational corporations.. The ISO 9002 accreditation is a clear signal to our valued clients that Azal Blue Bell Shipping provides a consistently reliable quality services.
Posted by kokstad at 15:14